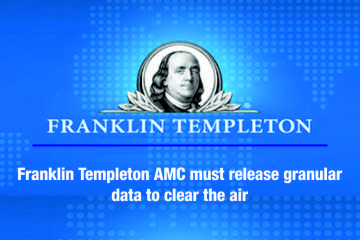 The Franklin Templeton roller coaster ride continues. Just as investors were preparing to celebrate the return of positive cash balances in some of the six schemes sought to be wound up earlier this year, another aspect that strikes at the heart of investor confidence has emerged.

With the Economic Offences Wing (EOW) Chennai, a section of the Tamil Nadu Police Department filing an FIR against senior functionaries of Franklin Templeton Asset Management (India) Private Limited (FTAMC), this already sordid saga has taken another twist. The possibility of criminal wrongdoing, which was restricted to a few theories at the fringe of this debate, has suddenly been thrust centre stage.

FTAMC, as well as the MF industry, have taken this quite hard. The latter dispatched an earnest appeal to the Securities and Exchange Board of India (SEBI) to “get back control” of the investigation and stop further deterioration in industry morale. This appeal, though well-intentioned from the industry’s perspective, may well appear as an attempt to stonewall the investigation to those on the other side of the debate. For investors keen to get to the bottom of the issue, a criminal investigation into it is very welcome. The divide between the industry and its investors has never been this apparent.

From the time that this episode began, there have been murmurs of possible wrongdoing. Last week, Moneycontrol reported the findings of a forensic audit that found that certain key officials of the fund had redeemed their personal investments just before the formal announcement of the closure of six debt schemes and made money during that time.

This also raises the question whether selected investors were advised to exit these funds in the weeks leading to the suspension/winding up. Looking at publicly available data presents a mixed picture.

Using the quarterly average assets under management (AUM) data published by AMFI, a comparison of the change in average AUM in the quarter ended March 2020 with that in the quarter ended March 2019 is instructive. It is immediately apparent that the quarterly average AUM for the six pertinent schemes reduced by about 18 percent in 2020 compared to a growth of 7 percent in 2019. This points to a change in investor behaviour and needs further analysis for which we would need granular, daily data.

To ascertain whether FTAMC or its distributors had a role to play, publicly available data is studied from two angles.

The first line of enquiry seeks to ascertain whether there was any divergence between redemptions in the direct plans and regular plans in these funds in the quarter ended March 2020. Higher redemptions from direct plans may indicate selective flow of information to investors served directly by FTAMC and point to complicity.

This analysis of publicly available AMFI data does not indicate any preferential information to direct clients since it is observed that redemptions from direct plans in the March 2020 quarter were lower than that from regular plans. However, this conclusion comes with a significant caveat.

Plan-wise data for these schemes is not available for the period between March 31, 2020 and April 25, 2020 when the schemes were sought to be wound up. Redemptions in this period may well exhibit the same characteristics as that above. Or not. This is where more data will help.

The second line of enquiry is to ascertain how long before the winding up decision did redemptions start and their relationship with the various credit events that transpired. For this, monthly data of detailed portfolio holdings posted by FTAMC is used. Monthly AUM data for each of the six schemes from April 2019 to April 2020 is compared with each other to ascertain when investor behavior changed and to what extent.

While there are some differences on how the AUM of each of the six schemes behaved over earlier months, there is remarkable similarity for the months of March and April 2020 with the size of the schemes reducing by 34 – 48 percent in just these two months. It appears probable that some investors chose to exit the schemes just before the real turmoil hit.

To understand whether these redemptions were driven by credit losses in these schemes, this monthly AUM data was compared to daily Net Asset Value (NAV) data for each of the schemes.

And while the others present a mixed picture for earlier months, it is clear that AUM declined for all 6 schemes in the month of April 2020.

Once again, analysis is severely restricted by the availability of data and the doubts raised by the monthly AUM data can only be countered, or proved, by plan-wise daily AUM data for all schemes.

It is in FTAMC’s and the industry’s interests that such doubts are dispelled swiftly. While FTAMC may well continue with its stand that everything it has done is legally sound, the time for this has passed. FTAMC must put a lot more data in public domain than that required by regulations to allow investors the opportunity to analyse it. Any delay, and its already more than 4 months since the winding up was initiated, only reinforces prevailing doubts. After months of legalese and darkness, it is time for some sunlight.